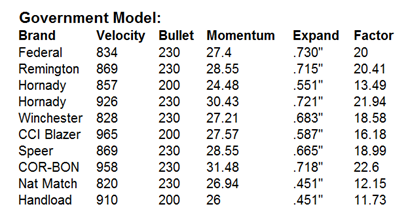 Technical Information for Gunsmiths and for Classic Car Enthusiasts

AMMUNITION TO BE TESTED:

On 16 Sept 95, actual firing tests were conducted on the above ammunitions. All ammunition was bought commercially except the 200 grain lead SWC load and should represent currently available offerings. It should be remembered, however, that ammunition companies may change bullet construction or loading data without notice to the consumer. With this in mind, I would recommend that you test any ammunition you might be considering prior to purchasing any great amount of it to ensure that it: a) performs in a similar manner to the ammunition I have tested here and b) will feed and eject properly in your pistol.

All of the various bullet styles cycled worked properly in my pistols and no feeding/ejection problems were noted.

All of the 230 grain loads maintained their bullet weight with no more than a few grains loss. Most of the recovered bullets weighed 230 grains and none was less than 221 grains. All bullets expanded well and held together without breaking up.

With the 200 grain bullets the results varied significantly. The 200 grain Hornady Jacketed Hollow Point lost about 5% of its weight and showed relatively little expansion. Velocity of the Hornady 200 grain bullet was less than that of the 230 grain Hornady in both pistols. The 200 grain CCI Blazer (same bullet as the Speer/CCI Lawman ammo) was of significantly higher velocity than the Hornady, but tended to break up. In the majority of cases, the jacket separated from the core. Recovered bullets weighed from 186 grains down to 95 grains. The 95 grain bullet had not separated from the jacket. This round also has a reputation for unreliable feeding, but I have never had this problem in any of the guns I have tested it in.

Of the 230 grain loads, the Hornady, Federal, Remington and COR-BON were the top rated loads in the Government model. In the Officer's ACP, the Federal, Remington, Speer and COR-BON were top rated. If I had to pick only one brand of ammunition to use, it would be the 230 grain Federal Hydra-Shok. It is, however, the most expensive ammo available (except for COR-BON). Remington 230 grain Golden Sabre is the least expensive on a per cartridge basis (it is 25 per box while the rest are 20 per box). The Hornady 230 grain is significantly less expensive than the Federal and out performs it in the Government model. If I were to stock two different brands of ammo, I would use the Hornady in my Government models and the Federal in Commanders and Officer's ACPs.

One last area of concern is penetration. All of the expanding bullets stopped within about 6" of penetration. The 200 grain Lead SWC penetrated over 9" and the 230 grain FMJ penetrated over 11". For straight on shots all of the 230 grain loads should suffice. For shots angled in from the side, especially if they have to penetrate the arm before entering the chest cavity, their penetration may be insufficient. For penetration of automobile doors and windshields, most of the momentum of the bullet may be used up in penetrating the barrier when expanding bullets are used. There is still a need for the 230 grain FMJ where maximum penetration is required. The Hornady 230 grain "Flat Point" may be the best bullet here, but the traditional round nose is also acceptable. While in Alaska, I carried a Government model with factory FMJ as a bear gun when we knew there were wounded bears in the area.

The lack of penetration and weight retention of the 200 grain CCI bullet may make it preferable for use in a house gun. Many of the currently built homes only have sheet rock interior walls. While I do not think any of the 230 grain bullets would penetrate the chest cavity and exit with sufficient velocity to pass through two layers of sheet rock, they could if they only hit the arm, neck or the shoulder above the collar bone. In this case, the CCI load might prove preferable. I would not, however, use this load myself.